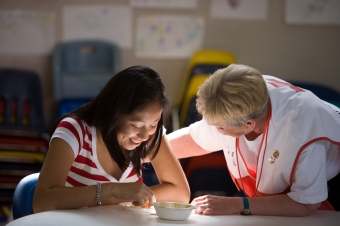 If you have ever volunteered your time or made a donation, you can probably attest to the warm and fuzzy feeling that you get afterwards. Furthermore, science is now saying that being socially responsible can have some positive impacts on both your physical and mental health! Helping the community is an important value at The Medical Station and we want to help you understand some of its benefits that you may not have known.

What is Social Responsibility

The benefit of decreased depression rates of people who volunteer in their community is likely the most straight forward. People of all ages were demonstrated to have lower rates of depression after long-term volunteering. This is attributed to the increased availability of social and psychological resources to the volunteers as well as increased socialization, especially amongst the elderly. One study even found that volunteering for causes connected to religion showed increased mental health benefits.

It was also demonstrated in a study in Wisconsin that people who volunteered reported increased psychological well-being long-term. This was especially true for people who were not previously well integrated into society.

A study in 2013 discovered that being socially responsible can have some significant positive implications on your physical health as well. By volunteering for approximately 200 hours a year, you can significantly decrease your risk for developing high blood pressure (more technically known as hypertension). This is important as high blood pressure is a risk factor for many debilitating diseases such as heart disease and can increase your likelihood of having a stroke or heart attack.

Being socially responsible can also play a role in helping you to live longer. Another study indicated that people who volunteered were at a lower risk of mortality later in life. They also pointed out that the more you volunteer, the more benefits you will experience when it comes to your life span. However, this study does mention that the benefit in life span is only seen when the subjects volunteered for the good of the community and not their own personal gain (for example, if you decide to volunteer more after reading this article in order to live longer, you will probably not see this effect- sorry!)

How does it work?

While scientists do not entirely understand how social responsibility has the positive benefits on your health described above, many will agree that Oxytocin likely plays a role. Oxytocin is a hormone that is connecting to feeling good and has therefore been called the “compassion” or “hug” hormone. Oxytocin release after volunteering can account for many of the effects discussed, as it has shown to decrease depression and stress while increasing well-being and lifespan. However, scientists also make note in the literature that there are some factors that may be messing up the results of studies looking at the benefits of social responsibility. Researchers note that many of the subjects in their studies chose to volunteer on their own, and are also more likely to have other healthy habits, such as eating well and exercising. However, there are studies that show that even when the study controls for these factors, also known as “confounding variables”, the positive effects on life span are still observed.

If you are looking to volunteer or donate more in our community, there are many useful online resources you can consult. The Medical Station hopes you’ve gained a greater understanding of why social responsibility is important and a few more reasons why you should include giving back in your daily life.