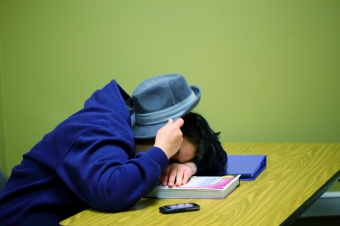 University is a great place to make lasting friendships, learn new skills, and expand your education – but it also has its downsides. From the common cold, to sexually transmitted infections, to meningitis, there are plenty of contagions that spread easily through the crowded dorms of a college campus, and are often spurred by the chaotic or unhealthy lifestyles of university students. In this week’s blog, The Medical Station explores common illnesses & ailments among university students and their symptoms, treatments, and preventative measures.

College is a place where you are almost guaranteed to catch a cold or the flu at some point during the year. Stress, lack of sleep, poor eating habits, and crowded dorms and classrooms are all major factors in perpetuating viruses. Symptoms of the common cold include a sore throat, runny nose, cough, sneezing, headache and body aches, as well as respiratory problems and irritations. Preventative measures against the flu include keeping proper hygiene – especially washing one’s hands regularly – as well as proper eating, exercise, and sleeping habits. Treatments for the common cold include decongestants and antihistamines.

Symptoms of the flu are similar to those of a cold, but usually also encompass an ongoing fever, overall exhaustion and weakness, as well as headaches. The flu can be treated with rest, plenty of fluids, antihistamines, anti-inflammatory medication, and decongestants, and can be prevented by proper hygiene and receiving the flu vaccine, which is often readily available on university campuses, as well as at The Medical Station! Other cold-like ailments to watch out for include streptococcal infections (commonly referred to as strep throat) and mononucleosis (commonly referred to as mono). These illnesses have similar symptoms to the flu or cold, but often include swollen glands or tonsillitis, accompanied by extreme exhaustion.

Meningitis is the inflammation of the membranes surrounding the brain and spinal cord. While it is a very manageable disease, when left untreated it can be fatal. College campuses are prone to outbreaks of meningitis because of the communal and often crowded spaces such as lecture halls and dorms. Symptoms include a stiff and painful back and neck, fever, chills, headaches, nausea, confusion, vomiting, and sensitivity to light. Meningitis can be prevented by staying hydrated and hygienic, as well as by being vaccinated. Meningitis vaccines are the best preventative measure for the disease, and are offered at The Medical Station when you book an appointment or come in during our walk-in hours! Antibiotics and rest are the common treatments.

Difficulty sleeping is experienced by 50-70% of university students. Staying up late finishing papers, partying with friends, or being kept up by stress are constant aspects of the college lifestyle that can lead to sleep disorders and insomnia in university students. Sleep deprivation can lead to memory issues, weight gain, muscle aches, and colds, as well as sleep disorders that are difficult to treat such as sleep apnea. Insomnia is a type of sleep disorder that is brought on by physical or emotional stress and discomfort, as well as by certain medication. It is characterized by difficulty falling asleep and maintaining sleep. Prevention of sleep deprivation includes setting a strict sleep routine, exercising, meditative or stress-relieving activities, and limiting caffeine consumption, especially late in the day or evening. Treatments for sleep disorders vary based on the problem and patient. For a full list of sleep disorders and treatments, visit The National Sleep Foundation website.

STI’s are one of the most common ailments associated with university students, with one in four having some form of sexually transmitted infection. With a newfound independence and time to experiment with their sexuality, college students are often proprietors of sexually transmitted infections. These include HPV, syphilis, herpes, gonorrhea, HIV, and chlamydia. There are a variety of vaccinations that prevent certain STI’s including HPV and hepatitis. The most effective way to avoid contracting an STI is to practice abstinence, however, this is not always a preferable or viable option. For those who are sexually active, it is important to practice safe sex by using either a female or male condom. Treatment for an STI is dependent on the nature of the infection. For a full list of STI’s and their treatments, visit the Planned Parenthood website.

If you are suffering from any of the above ailments, The Medical Station is equipped with the services to help. Our welcoming and interprofessional team includes several Family Physicians that are prepared to see you either as a walk-in patient or by appointment. The Medical Station is also pleased to provide access to Registered Dietitians, Social Workers, Chiropractors, a Registered Massage Therapist, Physiotherapist, and Yoga & Meditation Therapist. Book an appointment now to secure a time to meet with any of our staff!

Keep an eye out for next week’s follow up blog in which The Medical Station explores more illnesses and ailments common to university students.