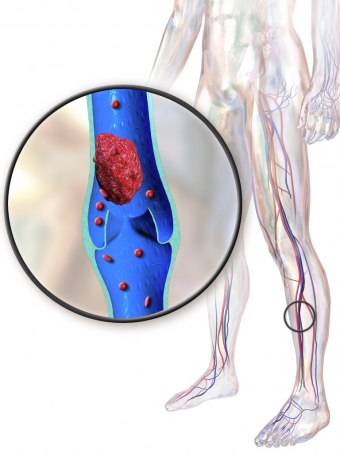 Deep vein thrombosis (DVT), also known as deep venous thrombosis, is the serious and often painful result of a blood clot formed in one or more of the deep veins of your body. Most commonly occurring in the deep veins of the legs, DVT can cause pulmonary embolism (PE), which is often fatal. The Medical Station discusses the risk factors, symptoms, and treatments for DVT.

Deep vein thrombosis refers to a blood clot, or thrombus, which has formed in the deep veins of your legs, pelvis, arms, or neck. DVT is often the result of prolonged rest/lack of movement, damage or strain on the leg veins, or blood clotting issues.

While clots can also form in the superficial veins of your legs (or other body parts), these are far less serious as it is less likely that the clot will travel to the lungs. While we may not typically think of our legs when we hear about blood clots, the risk for pulmonary embolism makes DVT a serious medical concern. Although there is a paucity of information when it comes to DVT statistics in Canada, it is estimated that roughly 200,000 Canadians are affected by DVT each year.

Venous thromboembolism (VTE) refers to the process whereby the deep vein leg clot breaks loose and travels through the blood stream where it eventually settles in the lungs, causing a pulmonary embolism (PE). The blood clot is much more dangerous when it is lodged in the lungs as it can prevent the life sustaining function of breathing. VTE is one of the most common cardiovascular disorders in Canada.

There are a number of risk factors for deep vein thrombosis and venous thromboembolism. Some of the most common include:

As is the case with many conditions, the symptoms of DVT vary based on a number of factors, including the size of the clot (which can be as big as your thumb). Some of the common DVT symptoms include:

Individuals may not experience any symptoms associated with DVT and as a result will only seek medical attention if and when the clot has travelled to the lungs and they are experiencing a pulmonary embolism. Symptoms of PE include:

There are some specific steps one can take to prevent DVT when taking a long flight. Some of these tips include:

If you think you are experiencing DVT, contact your physician immediately. Do not rub, exercise, or move the affected area. Your physician will diagnose you by conducting a physical exam (where they check for swelling, tenderness, or discolouration) as well as a series of questions. An ultrasound, venography, CT, or MRI may be necessary.

There are a number of different treatments available for addressing DVT – in order to prevent an existing clot from getting bigger, prevent a clot from breaking loose, and reduce future DVT. Some of these treatment and management plans may include visiting your physician regularly if you are at risk, ensuring your medications are appropriate and you are taking them properly, and utilizing blood thinners, compression stockings, and regular physical activity & movement. For educational resources, visit Thrombosis Canada.

If you are experiencing DVT, or are at risk for DVT, visit your Family Physician at The Medical Station. We look forward to working with you to manage your DVT risk, as well as any other health and wellness needs.