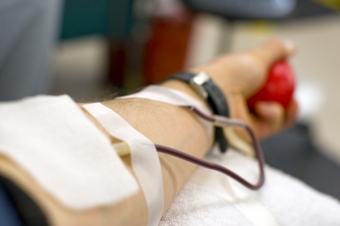 According to Canadian Blood Services (CBS), half of all Canadians will either need blood themselves or know someone who will need blood at some point in their lives. The ongoing need for blood is clearly demonstrated, yet only 4% of Canadians donate blood products. The Medical Station, opening in North York in Spring 2016, discusses the importance of blood donation, its benefits & risks, and some of the recent controversies that have surrounded blood donation in Canada.

The Importance of Blood Donation

Most people who have donated blood before can tell you, it is a relatively simple and benign process, yet the results are meaningful and profound. Blood products from donors are used every day in health care, including for surgeries, medical treatment, and managing accident victims.

Blood donation in Canada is extremely safe. It is federally regulated through Canadian Blood Services (except for Québec, which has its own provincial agency, Héma-Québec). All blood donation clinics are sterile and use clean and disposable equipment. The risks associated with blood donation are minimal – less than 10% of people feel tired after donating blood and roughly 5% feel light headed or nauseous.

As a donor you will likely experience the warm glow associated with blood donation – that’s the good feeling and satisfaction you receive from altruistically donating blood. Additionally, there is some research currently being conducted on the possible health benefits of regular blood donation. Though the results are not agreed upon, there is some evidence that may indicate a reduced risk of heart disease as a result of regular blood donation (by keeping levels of iron in check which reduce oxidative damage from iron build up). Others are suggesting links to reducing cancer risk, though significantly more research in this domain is required.

In 2013 there was some controversy in Toronto (and across Ontario) surrounding the ethics and potential health implications of payment for plasma donation. Canadian Plasma Resources, a private plasma collection company, was set to open multiple locations across the province where they would collect plasma and financially compensate donors. In response to this initiative, former Provincial Health Minister Deb Matthews introduced new legislation prohibiting paying for blood or plasma donation.

Many were concerned that payment for donation would result in individuals lying about their eligibility and the subsequent tainting of the blood supply (reminiscent of the 1980’s tainted blood scandal where 30,000 Canadians were infected with HIV and Hepatitis C), weakening or shrinking the volunteer donor pool for CBS, and exploiting impoverished and low-income individuals. Although the practice of payment for plasma is banned in Ontario, plans are moving ahead to open these clinics in Saskatchewan. For a deeper exploration of this controversy, please see here.

Donation Prohibition Against Men Who Have Sex With Men

Until 2013 any man who had sex with a man, even once, since 1977 was prohibited from donating blood. This ban was put in place at the start of the HIV/AIDS epidemic – when the disease was primarily transmitted by men who had sex with men (MSM) – in order to curb the spread of the epidemic. Since the time of the ban there have been significant changes in terms of blood testing as well as the epidemiology of HIV/AIDS.

In 2013 Health Canada modified the ban, allowing gay and bisexual men (as well as MSM) to donate blood, as long as they have not had sex with another man for five years. While some are applauding the progress that this represents, many are critical of these changes – asking if this really changes anything?

LGBTQ* advocates argue that this eligibility criteria is discriminatory, futile, and not supported by current scientific evidence. In response to these claims CBS has stated that it is working with Health Canada to reduce the deferral period to one year and is doing so in a way that is “as minimally restrictive as possible while also maintaining the safety of the blood supply”.

How To Become a Donor

There are stringent requirements in place by Canadian Blood Services in order to protect both the donors and the potential patients. To find out if you are eligible, take CBS’s eligibility quiz. If you meet the eligibility criteria, The Medical Station encourages you to donate blood. To find a blood donation clinic near you, click here.

If you have any questions or concerns related to blood donation contact Canadian Blood Services directly or feel free to speak with your physician at The Medical Station.